So I just finished my second attempt at installing win 11 - using the update method rather than a clean install (it would take days to re-install all of my apps!). When it was all done and the desktop appeared, my first thought was "OH It didnt work" because it still looked just like my 'old' win 10 desktop, i.e. the taskbar was to the left (turns out there is seemingly no way to put it in the middle), the START button and Search Box are still down in the left corner, there is tho, a new icon at the right next to the clock, called 'Control Centre' which contains the volume bar and also the settings. This is all very different to the first time I installed 11 a couple of days ago! (OK, for those of you wanting to know why this is my second attempt, after the first try I had the Windows can't install WMR problem, rendering my G2 as a very expensive paperweight - so I rolled back to windows 10 - which introduced a whole new load of problems, many of which I have been unable to resolve (like the pesky WMR installed but refused to work!). So I uninstalled some bits and made a few changes before attempting to try win 11 again. Here is the main problem which I now face > The START button and Search box are frozen in time, refusing to work. Of course it was not so easy to do a restart (had to use Alt + F4), but after restarting and trying numerous fixes, it still refuses to work - as do some key shortcuts like Win + S and that Alt + F4 is intermittent. For the record, it still refuses to install anything WMR related! I really do not want to roll back to 10 and face all those problems again, so Damned if I do and Damned if I don't!

Any suggestions please before they carry me off to the asylum?

Lokks like you forgot to make an AOMI autoboot usb?
can you borrow another computer to do that otherwise I reckon your option is to roll back once more and do that. Reboot from the usb! - make your next decision from there.
my own succesful way is to download the official windows 11 iso to a usb, boot into it and try another install, keeping your settings
Last edited: Oct 13, 2021
H

MrGlenn said:
I did make a clone of the windows 10 before I started trying win 11, but as yet I can't find a way to copy it back to the 'C' drive. (Using AOMI).
Click to expand...

Hopefully you made a disk image rather than a "clone".
A clone being a second physical hard drive which is an exact replica of the source drive, in which case you would need to physically remove the original source drive and replace it with the "clone".
However if you instead created a disk image perhaps this will help

How to Restore Disk Backup Image with AOMEI Backupper?

This option can help to restore hard drive image to a right status when the disk is broken, or you want to replace it with a new HDD.

Bit out of context in this thread, Henry
H

davehc said:
Bit out of context in this thread, Henry
Click to expand...

Allowed and encouraged, although I have to admit that it actually took me a beat or two before I got it

No hard feelings. Just remarking and , hopefully, helping the new member - the op, who may have been confused with the cryptic comment.

Nope I got it, made me smile. SO: where am I today? I more or less have Windows 11 up and running OK (ish). My main problem at the moment is the START button and the search box, neither of which work. And I have tried just about every fix that I could find via Google. Other problem is that I am also unable to do a Right click on the desktop - it does this strange thing where after a few seconds I get a black screen then everything resets itself - meaning that I (so far) can't find a way to access Nvidia Control Panel. Task bar items are still on the left not in the middle, but it's not a problem. Unsure yet whether or not I like the 'Control Centre' over near the clock. It appears to be the only way to get to the Settings. Going to try and stick with it for a while tho' and keep fingers crossed and keep on looking etc. So far it seems that all apps & progs are running OK, but I will be surprised if I don't come across other problems eventually!

Regarding the Nvidia problem, isn't there a tray icon either on the taskbar or in the taskbar overflow? I have one (in overflow by choice) and I can right-click on it to select either Nvidia Control Panel or Nvidia GeForce Experience.

From your description, your Windows 11 installation is in a total mess. It bears no resemblance to mine.

Frankly, I think your only decent option is to try and put you “ clone” back. Then start over. I still favour the downloading of the official ISO the most reliable choice for you

Couple of things have happened without any intervention from me: There was no sign of the CP in the tray or anywhere else (although GeForce Experience was in the tray!!). Earlier today, I put the PC into sleep mode while I went shopping. Just bought it back to life and lo-and-behold, not only is the CP in the tray, but so are some other bits. And I also just discovered by complete accident that I can now right click on the desktop as per usual! I can't get my head around how that could have happened! Incidently, all VR stuff suddenly started to work yesterday, as if by magic as it became possible to download the necessary apps. Now all I'm waiting for is some magic to sort out that START button and search box! Maybe MS has managed to include some magic spells in Win 11 ?? I certainly did not want to go rolling back to 10 for a second time until it became a absolute last resort!

Like trouble’post, I am still apprehensive of your reference to a clone.
I would suggest you get hold of the free Macrium and start making frequent backups - remember to use their option to make an autoboot device.
I am an experimenter and, from time to time, make an error which I want out of the system. Reloading the latest image does the trick in ten minutes
Last edited: Oct 14, 2021

MrGlenn said:
Now all I'm waiting for is some magic to sort out that START button and search box! Maybe MS has managed to include some magic spells in Win 11 ??
Click to expand...

Magic spell to try on search box problems (according to Microsoft)
Hold down the windows logo key on your keyboard while simultaneously striking the R key
That should launch the Run Dialog box.
Cancel or close it and try the search box again.

Now that I actually am reading it....
It doesn't sound too Magical
Maybe you can add a verbalization like "abracadabra"

Yep cheers peeps, I am aware of the Win + R key combo thanks. When I speak of the START menu AND search box, it is because they are closely linked - they both work or they both dont work. Bit pointless having them there if you have to resort to alternatives to get same result. Not much point having a car if you have to hire a taxi (cab) to get you to where you want to go!
As for the cloned disk, yep I did mess up there. Probably because several years ago I used the same app (AOMI) but an older version, to clone discs and they have worked just fine as boot discs - seems can't do same these days. AOMI do have a method of turning them into boot discs, by downloading a file called ADK, but at the moment I am finding it somewhat awkward to use! Best to make it a boot disc from the start. I have ordered 2 new NVME's and I plan to make a BOOTable clone of 11 once I get it running nicely, and then try and figure out a way of doing same with a windows 10 disc (WITHOUT rolling this current one back - but think I now only have a few days left for that option anyway). But thanks to all for suggestions - even if they dont work, it's all good stuff for future reference.

I think the two shortcuts from Trouble and myself are just a couple of forlorn suggestions to at least get you into those two items.
Still emphasising the need for a more beneficial image, rather than a clone!

Sorry to drag this back from the first post. I have been googling the solutions for your problem. (I know you have done that!). It seems that the problem is specific to windows 11 Beta/insider downloads. 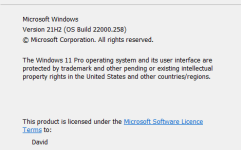